This field of research is characterized by the intensive networking of structural, tectonic, geochronological and petrological research approaches. In the last 20 years this field of science had benn continuously established in Graz. The combination of structural geological, petrological, geochemical and geochronological methods turned out to be very successful. A major focus is the investigation of units with high pressure metamorphism or high-grade metamorphic overprint and the exhumation of high-pressure units. Several projects in Argentina, Egypt, Kenya / Tanzania, Northern Greece, the Czech Republic and Alaska were or are currently carried out. Outstanding successes include a tectonic reorganization of the East African orogen in Tanzania or the evidence of an ultra-high pressure metamorphism in the Rhodope Mountains, as evidenced by diamond inclusions in garnet from mica schists.

Geochronological and geochemical studies in the Alps enabled new models for the development of the pre-Alpine and Alpine crust of the Alps in many areas.

Working out the connections between endogenous dynamics and near-surface processes has become increasingly important in recent years. The effects of recent to sub-recent movements along faults and fault zones and the effects on surface processes such as the uplift of crustal blocks, the formation of a relief and the development of the morphology including the water network are essential. The combination of structural geological methods, low temperature geochronology and sediment geological - stratigraphic methods has proven to be essential for this area science. Numerical modeling has proven to be of high importance particularly for erosion processes and water dynamics. Several projects, preferably in partially still active young collisional orogens (Alps, Himalayas), have been and are currently being carried out. Furthermore, interdisciplinary studies are carried out with regard to the hydrological effectiveness of faults and fault systems. 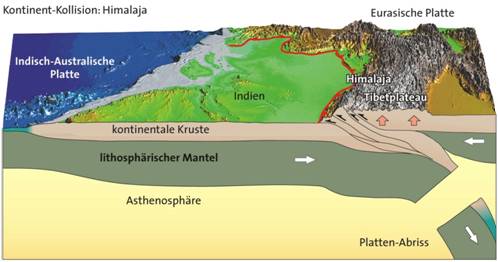 Continent collision in the Himalayas: the figure shows the relationship between processes in the lower crust and the earth's mantle and processes on the surface. The breakoff of the subducted lithospheric plate causes the uplift of the Himalayas and the Tibetan plateau (from Frisch & Meschede: plate tectonics).

Graz is a leader in scientific research on the geology of the oceans throughout Austria and is internationally visible in this field of geological sciences. The "International Ocean Discovery Program" (IODP) is an international research program to study the ocean floor by means of drilling in order to better understand the development of the earth. For this purpose, offshore research platforms are used to obtain data in sea sediments and solid rocks of the ocean floor, and to document and analyze processes over long periods of time using permanent measurement systems on the ocean floor.

The aim of the "Costa Rica Seismogenesis Project (CRISP)" was to better understand the processes that are responsible for the formation of severe earthquakes in the area of erosive plate boundaries.

CRISP is located in the only known seismogenic zone on an erosive plate boundary that can be accessed by scientific drilling. Expedition 344 focused on the boundary conditions such as the lithological composition of the subducted plate, hydrology and thermal structure in the area of the Middle American trench.

During IODP Expedition 352, a section of the volcanic stratigraphy of the outer forearc of the Izu-Bonin-Mariana system was drilled with the aim of tracking the processes of magmatism, tectonics and crustal accretion associated with the beginning of a subduction process. The results of this expedition, in turn, have implications for understanding the origin of many ophiolites that are believed to form in a similar tectonic setting. 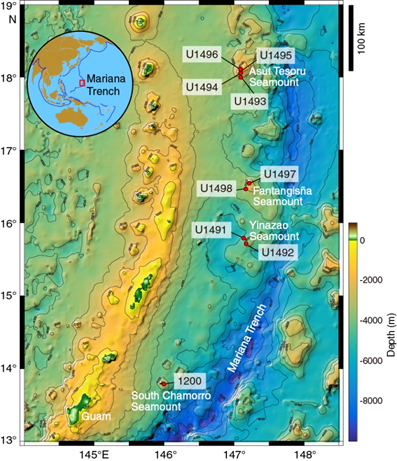